Due to numerous requests – this is the English summary of my model for the Credit Rating Market (presented at the ESE European Supervisors Education Initiative, April 2012)

Model to promote competition and transparency in the Credit Rating Market using the German Banking System as an example – Dr. Andreas Buschmeier, www.buschmeier-consulting.de

For several years the most influential American Credit Rating Agencies have been subject to enormous criticism. This has particularly been the case since the outbreak of  the financial crisis in 2008 where common allegations included the lack of transparency in rating methodologies and limited competition in the Credit Rating Market.

Dr. Buschmeier presents a model that simultaneously increases competition in the credit rating market whilst improving the transparency of ratings by letting the banks take over the very lucrative business of  Rating Agencies. He advises the establishment of three centralistic Credit Rating Agencies, each set up an run by the large German banking institutions – “Sparkassen”, “Genossenschaftsbanken” and “Großbanken”.

Due to the legal requirements on capital adequacy (Basel II), every bank of each of the three banking institutions is using its own individual rating software to perform the task of credit rating. It seems logical that significant cost advantages could be achieved by simply centralising the process of credit rating. In addition, the banks‘ internal rating systems are subject to the Basel II internal ratings-based surveillance standards – if they are used for calculating capital adequacy – with transparency rules that go far beyond the standard approach with its external ratings.

As well as greater transparency this model will also achieve a higher degree of competition by adding at least three new rating agencies in Germany alone. In this way market forces can take effect. Due to the fact that Basel II has already been implemented in Europe, this model could be applied all over Europe and possibly even worldwide, assuming the US were to adopt the new capital adequacy rules.

The problem of the lack of reputation being the most significant barrier to entry would therefore not apply in this model, as firstly, the authorities’ recognition of the internal rating system would positively influence the reputation, and secondly, banks have built up a good reputation and collected decades of experience and data in credit assessment and allocation. As this is the core competence of banks, which is enhanced in Germany by the “Hausbankprinzip”, there will automatically be significant advantages in the assessment of quantitative and qualitative rating factors compared to the external Credit Rating Agencies. Furthermore there will be an inbuilt incentive to produce correct and exact ratings as each bank and in term its respective banking institution would be made liable for its bad debts. By contrast, external rating agencies are only exposed to a low liability risk.

The borrower benefits from lower costs due to more efficient loan processing and the direct relationship between risk and interest rate. Additionally, companies will receive a ratings at much lower prices compared to external rating agencies. A positive rating, if published, would have a beneficial impact on stakeholders and other banks, which could well improve the funding and terms of payment. It might even provide access to the capital markets.

The striking points about this model are: the model has been scientifically derived, it shows a market-based solution to the rating problems and leads to significant benefits for banks, borrowers and the capital markets.

3 Gedanken zu “Model for the Credit Rating Market by Buschmeier” 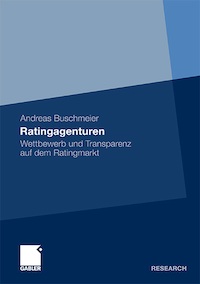